“If your actions inspire others to dream more, learn more, do more and become more, you are a leader.” On Monday 17th June the newly elected prefects 2019/2020 of Greenhill Academy Secondary Kibuli embarked on their leadership journey by taking an oath to serve the school to the best of their abilities during a colorful Swearing in Ceremony themed, Leadership is an action, not a position. The ceremony was graced by the Head of School Greenhill Primary School Buwaate, Mr. Benon Takirambudde.

After a moving praise and worship session, the ceremony was officially opened with an introduction of the theme by Mayeku Richard, the Outgoing Student Council Chairman.
In his address, he described leadership as an aspect that requires the best team and is about taking responsibility and not making excuses. He also emphasized that Leaders live to serve the people responsible for their position; good leaders must first become servants adding that, a leader is defined by the quality and the integrity of their actions.

A clear sign of democracy; the outgoing leaders could be seen encouraging and happily handing over their offices’ instruments of power to their successors who were smartly clad in their new prefects’ uniform. Representing the outgoing prefects, the outgoing Head prefect Swatang George thanked the school for their support and encouraged the new incumbents to raise the bar even higher as the rest of the school was ecstatic and could not wait to see what they have in store. He urged them to work as a team with the school concluding his address with the quote, ‘Change happens when ordinary people come together for a common goal’. 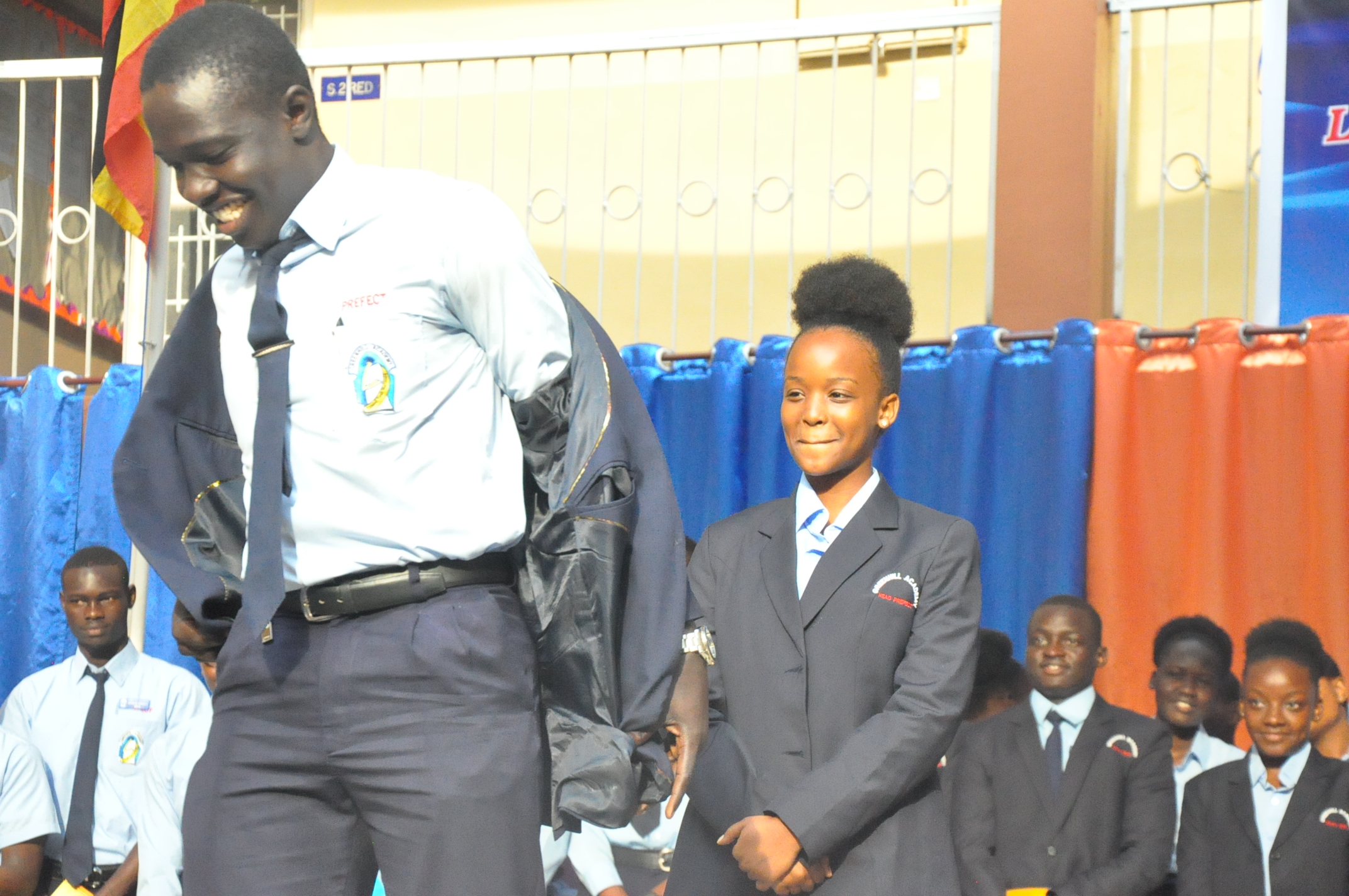 The above nostalgic speech was then followed by a speech from the newly elected, Head Prefect Ronnie Ninziza who appreciated the work done by the outgoing cabinet. She urged her cabinet to work together as a team and toil to produce the fruit that Greenhill expects them to produce. She also encouraged the team to remain focused, disciplined and to never give up when unforeseen circumstances arise. 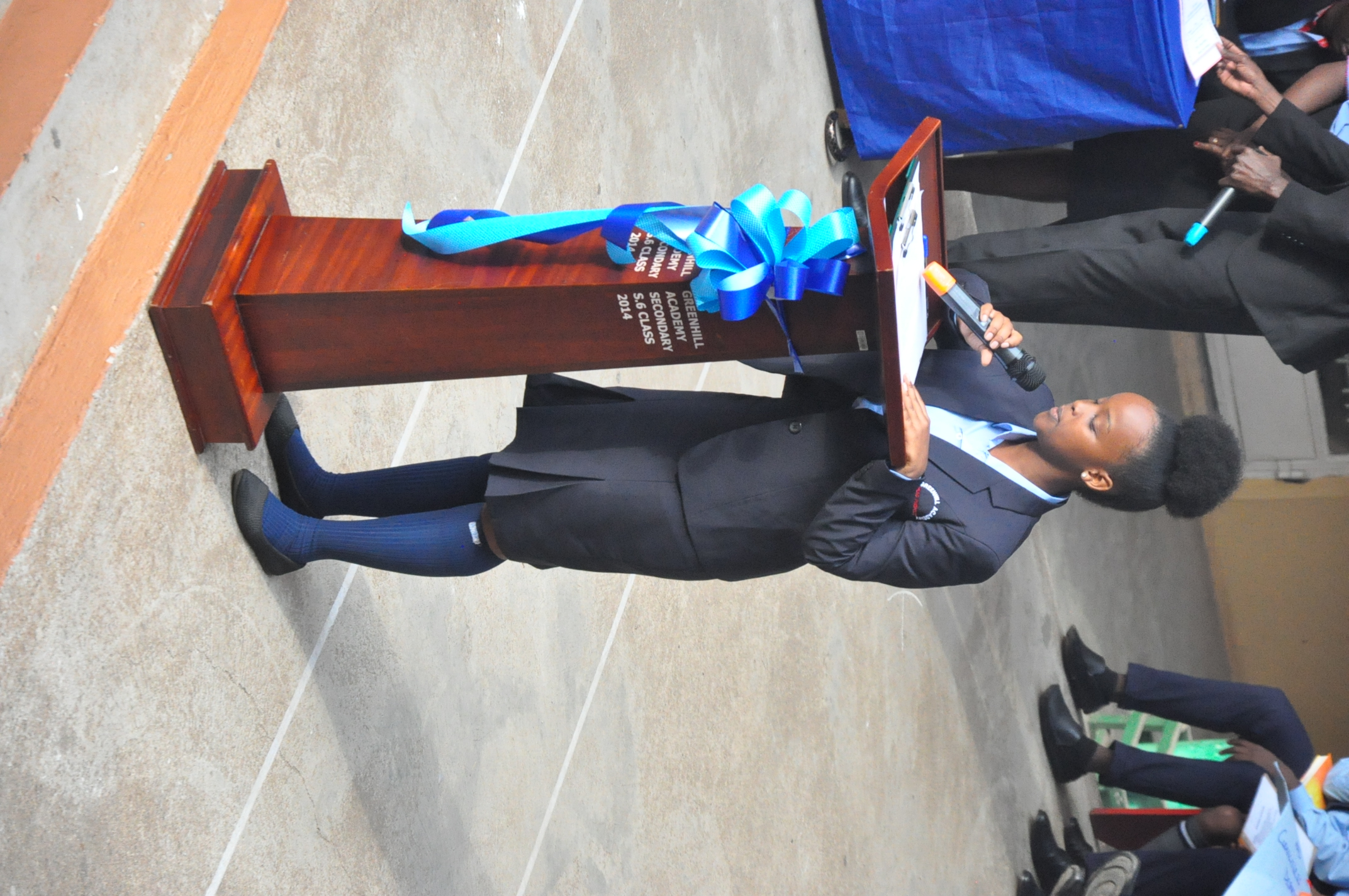 After the Head of School, Mr. Francis Twesigawe and the Rector, Mrs. Joy Veronica Maraka had addressed the audience both thanking the outgoing prefects for the work well done and encouraging the newly elected prefects, it was now time for the Guest of Honor to share a few words of wisdom with the students. 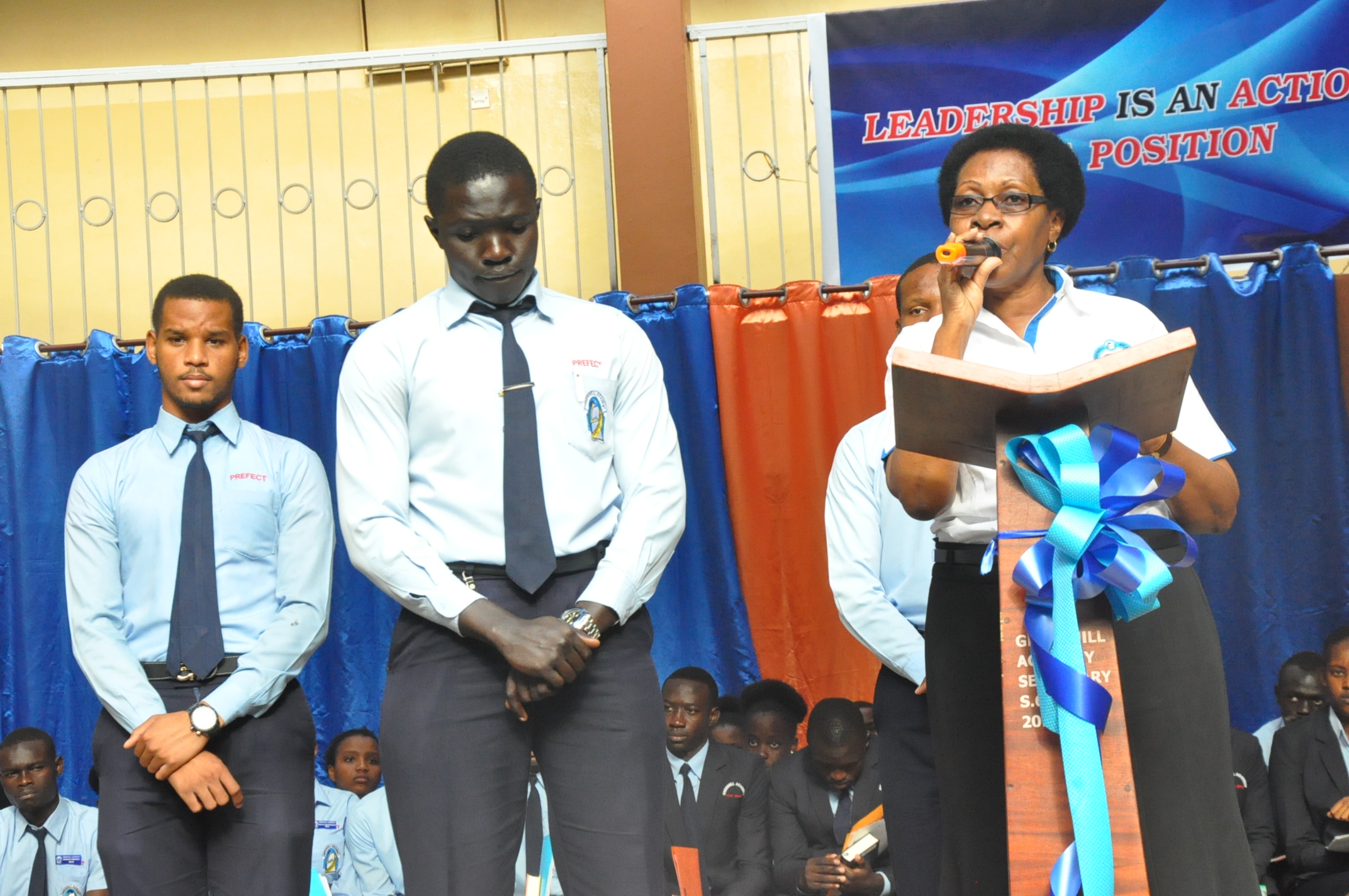 Mr. Benon opened his address with a story about Abraham Lincoln’s life and the struggles and failures He went through before becoming one of the most influential presidents of the United States of America urging the students to never give up nor be derailed by the challenges they may face.

He urged the leaders to be exemplary; empathetic; spiritual; to always plan and prioritize and, to never act impulsively. He further encouraged them to always be willing to learn because leadership is about humility and continuous learning. With reference to Romans 13: 1-12, Mr. Benon concluded his speech by urging the school to respect and work with the Leaders because God has chosen for them. 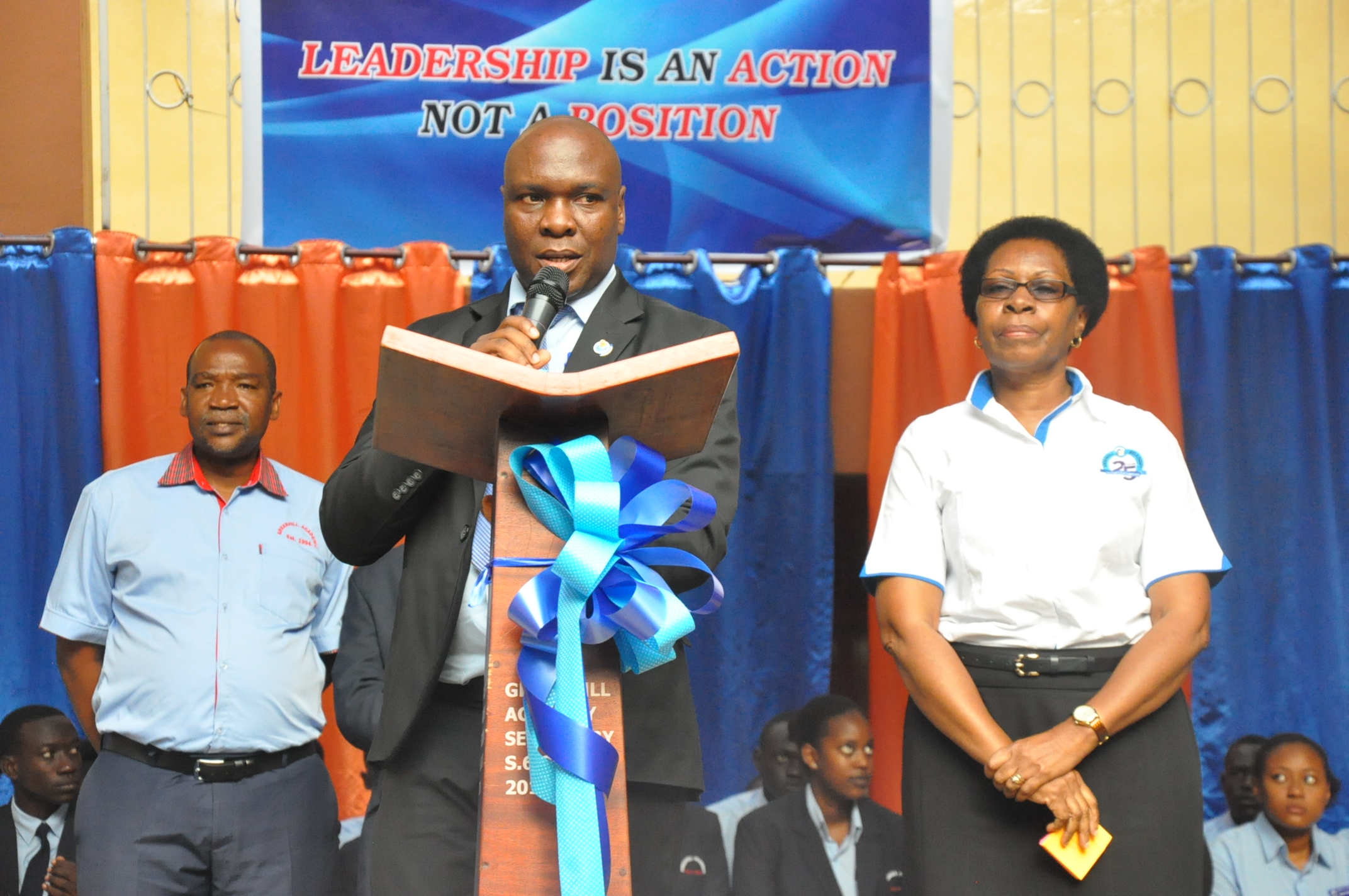 Something quite rare, the parents of the different prefects too attended the ceremonies and had a chance to witness their daughters and sons take on an important journey that will indeed shape the rest of their life; surely a memory never to forget. 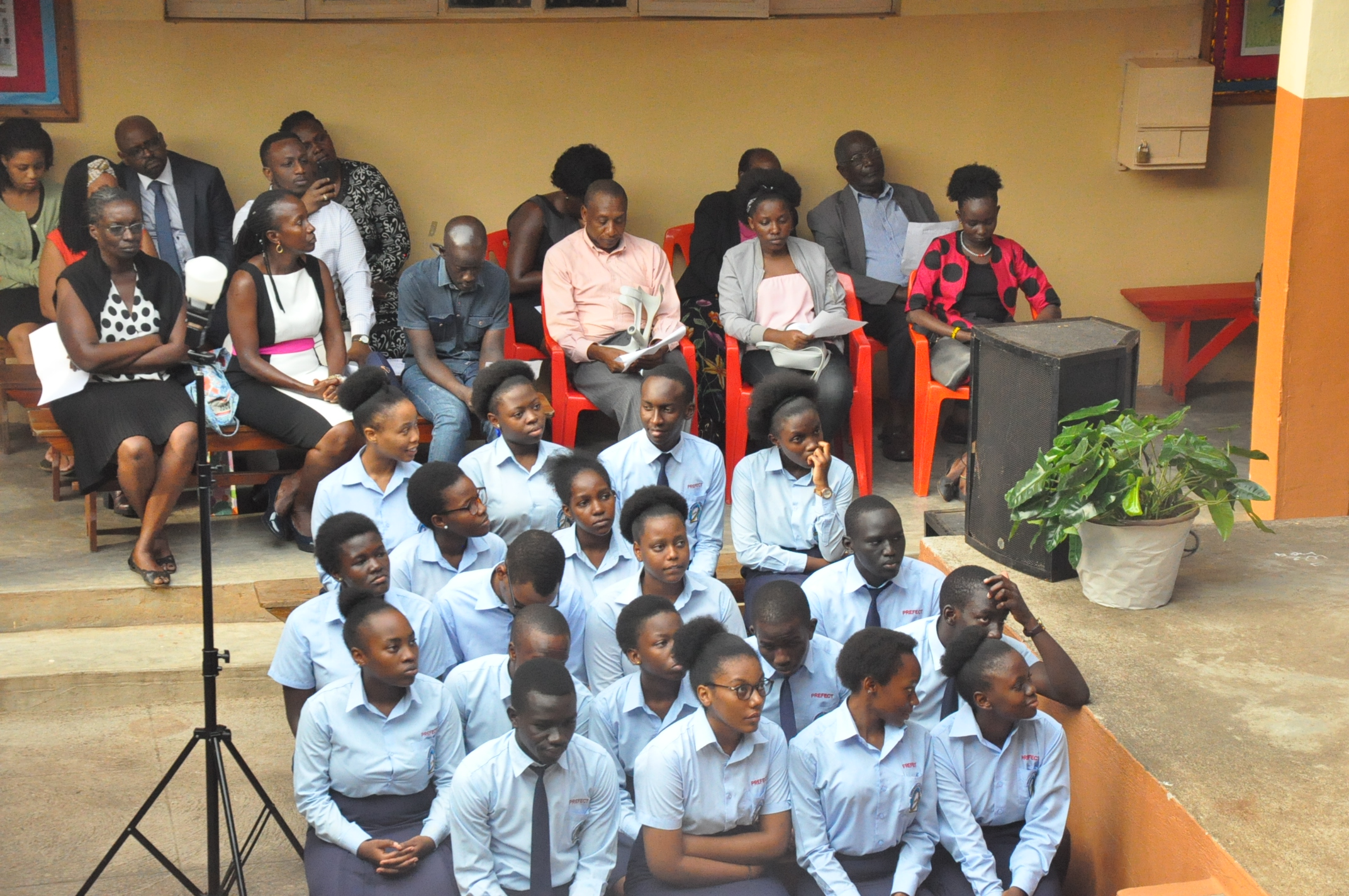 We would like to thank the students for taking part in the voting process and the electoral commission, teachers and school administration that ensured the whole process was free and fair.

To the outgoing cabinets; we would like to thank you for the great and exemplary work done.

To the incoming leaders lead by Ninziza Ronnie the incoming Head prefect and Tongun Emmanuel the incoming Students’ Council Chairperson; we congratulate you upon being elected into your respective offices. We wish you the best of luck and look forward to interacting with you.

To everyone out there; you too are a leader in different aspects. Leadership comes from Use it wisely!

Below is the full list of all the Incoming Prefects and Students’ Council Members.